The cheerful obverse to all these lacunae is that they save us…from drowning in the indiscriminate flood of total recall.

Forgetting most of what I do and say makes it easier to accept the fact that I’m required to spend so much time in my own company. I can hardly tell you what I did yesterday, though a galaxy of non-biographical trivia revolves around the central vacuum of memory. These gaps in recall feel vaguely incriminating. Where was I on the night of November 19? You may as well slap me in cuffs, officer.

I gazed at her with the reverence of an ornithologist at the glimpse of an Auckland Island merganser.

In the nineteenth century, when Europeans and other mammals tried to settle the Auckland Islands, the local mergansers showed the world that they would not give up their roosting grounds without a fight. Rather than fly off when threatened, as any bird might do who was used to the predatory habits of mammals, they scurried along and made a stand at the nearest pile of rocks. History teaches us that valiant actors of this sort are generally honored, as the Auckland Island merganser was, by the tribute of total extinction.

I wrote a brief appreciation of Patrick Leigh Fermor which was published over at The Dabbler today. The posthumous third volume of Fermor’s trilogy (begun with the marvelous A Time of Gifts) is out now in the UK and due to arrive in the states early next year. 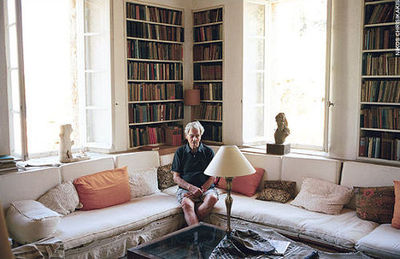 Friends and neighbors, he explained, sit up all night round the coffin, telling funny and often improper stories, dancing, and drinking rum, and even, after concealing small objects in the mouth or other natural hiding-places of the corpse, playing games of hunt-the-thimble. If the corpse has been a heavy drinker during his lifetime, bottles of rum are poured down his throat; if a dancer, his body may be removed from the coffin and whirled round the room…

Something similar happens when a figure in world affairs or the arts passes over River Styx. By means of print and commentary, the corpse is explored, predilections and achievements are rehearsed for memory’s sake, and the floor is cleared for a posthumous last dance. I was sick over the weekend and only learned today of Patrick Leigh Fermor’s death. His feats of wartime daring are literally the stuff of celluloid legend, but (like others of my generation) I only came to know him through the first two volumes of the unfinished trilogy that he began with A Time of Gifts. Here’s to hoping that the time of gifts isn’t ended just yet and that among the abandoned articles of his long and magnificent life there’s a manuscript copy of that dearly missed third installment.

Tagged as A Time of Gifts, Books, Patrick Leigh Fermor, The Traveller's Tree

According to a local tradition, an ordinary hen’s egg, if it is kept warm in the human armpit during the whole of Lent, hatches out on Easter Day and reveals a manikin three inches high, who at once prostrates himself before his foster-father and swears eternal obedience to him.

He says his name is Himmelfarb, if you can believe it. Endearing at first, the constant bowing is starting to bug. Every time I look at him he falls to his knees and taps his forehead to the table. “Dear God,” he asked me last night, “how should I live? What would you have me do? I only want to be your image and will in everything.” But the thimbleful of scotch I gave him was a mistake, and he was nearly pressed flat when the hardcover Montaigne closed up on him. My armpit is still sore.

Anyone that’s eaten an undercooked bratwurst will feel why the word ‘botulism’ derives from the Latin for sausage.  Similarly dismal results may come of too much drinking.  And yet, in one of the season’s happy conjunctions, the pairing of sausage and beer is universally honored this time of year.

Our local Oktoberfest was celebrated the weekend before last, the main drag closed to all but pedestrian traffic.   It’s only a faint echo at six thousands miles’ distance of the heroic beer halls of Bavaria.  The municipal authorities like to hire Army reservists for security and you’ll find them posted in fatigues around the perimeter of downtown.  It lends the whole thing a martial air that reminds me of Patrick Leigh Fermor’s visit to the Munich Hofbrauhaus in 1933 (from A Time of Gifts):

I squeezed in at a table full of peasants, and was soon lifting one of those masskrugs to my lips.  It was heavier than a brace of iron dumb-bells, but the blonde beer inside was cool and marvelous, a brooding cylindrical litre of Teutonic myth… The gun-metal-colored cylinders were stamped with a blue HB conjoined under the Bavarian crown, like the foundry-mark on cannon.  The tables, in my mind’s eyes, were becoming batteries where each gunner served a silent and recoil-less piece of ordinance which, trained on himself, pounded away in steady siege.  Mass-gunfire!  Here and there on the tables, with their heads in puddles of beer, isolated bombardiers had been mown down in their emplacements.  The vaults reverberated with the thunder of a creeping barrage…  Supported by comrades, the walking wounded reeled through the battle smoke and a fresh gunner leaped into each place as it fell empty.

The Man Who Walked

‘I’m deaf,’ he continued. ‘That’s the awful truth. That’s why I’m leaning towards you in this rather eerie fashion.’

The quote is from William Dalrymple’s interview with Patrick Leigh Fermor, conducted at the latter’s home in the Peloponnese.  It’s encouraging to see that Fermor has acuity and humor enough to make such remarks at 93 years old; encouraging, too, to catch Dalrymple’s reported sighting of the “8in-high pile of manuscript, some of it ring-bound, and some in folders, on which was scribbled in red felt-tip: Vol 3.”  It would be a double loss were Fermor himself to end before finishing his planned three-volume travel memoir – the second installment of which arrived over twenty years ago.

Reading A Time of Gifts and Between the Woods and the Water is an education in print, just as the 1933-35 trek recounted in the books served as an alternative university for Fermor, who had a knack for getting kicked out of school.  Without too much posturing -I think- on his own behalf, Fermor becomes in these pages a sort of everyman on pilgrimage to Byzantium, his life a bildungsroman even Childe Harold might envy.  In every wintry starving solitude he is the object of unexpected charity; in every metropolis, the consummate flâneur; under every gothic arch, the questioning, curious student; at the door of every fire-warmed baronial schloss, the adopted cousin of infinite fascination.

That particular Europe is gone.  It was on its way out even then in ’33, the year Hitler was made Chancellor.  The Rhine Valley, the Vienna, Hungary and Transylvania that Fermor describes, from the dual perspective of enthusiastic youth and world-wise soldier turned writer, is a heavy lesson in the cultural and personal costs of war: buried under a merciless weight of history, stamped out by the boots of the two great twentieth-century totalitarianisms.  But Fermor’s prose is an amber preservative, full of golden glimpses of a world-that-was.

About that prose: On first introduction you may experience the briefest hesitation, like a bather stepping into a swift, cold stream.  But then you give yourself to the current and are carried effortlessly, joyfully along.  Fermor’s is not the kind of writing that makes for the convenient collection of aphorisms or that encourages consumption in fits and starts.  It is seductive and intelligent, full of vigor and keen observation (I’m still haunted by his description of a Sunday morning in Germany, when the bells for mass pealed through the liquid atmosphere of a downpour: “We might have been in a submarine among sunk cathredrals,” he says).  Fermor’s is the kind of writing that makes for the slow, warm digestion that assures you that, yes, you’ve dined very well indeed.

Tagged as A Time of Gifts, Between the Woods and the Water, Europe, Heroes, History, Literature, Patrick Leigh Fermor, The Telegraph, William Dalrymple

The other day I was reading to my son about Roland and the Battle of Roncesvalles from our old copy of The Golden Treasury of Myths and Legends.  I grew up with this book.  It gave me my first taste of the Greek myths, the tales the Niebelungs, of Beowulf, and the Arthurian sub-plot of Tristram and Iseult.  The angular, stylized illustrations of dueling heroes and rabid monsters made fuel for fantasy and nightmare alike.  My son refuses to look at the picture of the Minotaur.

Of all the heroes and kings mentioned in the Golden Treasury, Charlemagne is, of course, the most solidly historical.  My son took a special interest in him, specifically in his name.  It has a magnificent ring to it, which is perhaps why we’ve never permanently anglicized it.  He is ‘Charlemagne’ to us just as he is to the French.  ‘Charles the Great’ isn’t saying enough.

Patrick Leigh Fermor in Between the Woods and the Water gives perhaps the best short description of the mytho-poetical-historical space that Charlemagne still holds in the western imagination:

Fireside mutterings, legends, centuries of bards and the lays of minnesingers have set him afloat somewhere between Alexander and King Arthur, where he looms, mural-crowned, enormous, voluminously-bearded, overgrown with ivy and mistletoe, announced by eagles and ravens, dogged by wolfhounds, accompanied by angels and oriflammes and escorted by a host of prelates and monks and paladins; confused with Odin and, like Adonis, akin to the seasons, he is ushered on his way by earthquakes and eclipses of the sun and the moon and celebrated by falling stars and lightning; horns and harps waft him across the plains; they carry him through canyons and forests and up to steep mountain-tops until his halo is caught up in the seven stars of his Wain.

Fermor also tells briefly of Charlemagne’s elephant, Abulahaz (“Son of the Mighty”), a gift from Harun al-Rashid, who was sent from Persia to Aix in 801 or 802 and spent most of his days tramping through the emperor’s wooded hunting grounds.  He was probably the only member of his species on the continent and must have been a lonely creature.  Or perhaps he was as fascinated by his fate as I am.  Abulahaz died ten years later in one of Charlemagne’s campaigns against the Danes.  You can be sure the anonymous Viking who gave him his death-blow had a story to tell.