The Heart of the Matter

Nature in us is a “riddling distemper,” writes John Donne. “We study health, and we deliberate upon our meats, and drink, and air, and exercises, and we hew and we polish every stone that goes to that building; and so our health is a long and a regular work: but in a minute a cannon batters all.” I read these words, from Donne’s Devotions upon Emergent Occasions, while sitting in my younger brother’s book-lined home office near Atlanta, earlier this month. I had flown out from San Francisco on the emergent occasion of his heart attack at age thirty-eight.

All his life my brother excelled at everything he set himself to. It was no great surprise, perhaps, that he would take up the family curse with zeal. Grandpa had waited till fifty for his first heart attack. Dad had waited till forty-nine. My brother’s first was no small affair but, being young, and with the aid of a well-positioned stent, he was soon home again with his wife and two girls. Now we sat together in his office, my brother working at the computer, myself leafing through his books, for all the world as if nothing untoward had happened.

The surreality of my few days in Georgia was not softened by the shock of summer greenery or the alien chirr of the cicadas at night or the unfamiliar birds diving between the boughs. Five hours of flight over lofty sierras, desert moonscapes, and among the towering thunderheads that march above the humid South had proven, if there were any doubt, that it was all one continent. But in its outward details it could hardly feel more different from July in coastal California.

The world that we carry within us may also become suddenly strange. “Is this the honor which man hath by being a little world,” asks Donne, “that he hath these earthquakes in himself, sudden shakings; these lightnings, sudden flashings; these thunders, sudden noises; these eclipses, sudden offuscations [sic] and darkening of his senses; these blazing stars, sudden fiery exhalations; these rivers of blood, sudden red waters?”

I find it hard to believe in a heart attack at age thirty-eight. And yet it happened. My turn will probably come. The cardiologists say that given our genetic history a vegan diet is the best bet. But, cosmically speaking, all prevention is temporary. Everything happens eventually. I can’t help feeling that our true predicament is one of metaphor rather than medicine, that all sickness is somehow spiritual. I understand how plaque ruptures occur. I know what myocardial infarction means. I brush these things aside and persist in asking, “but what is wrong with our heart?”

I don’t know if people were simply more gullible in the New York City of the nineteen-forties and fifties or if my easy cynicism has finally paid off in actual enlightenment, but I guessed Joe Gould’s “secret” long before the author himself discovered it. Gould seems to have been an intolerable person – a willful eccentric, a drunkard, suspicious and needy, suffering from delusions of grandeur. The last (perhaps) of the old Village bohemians, he claimed to be writing an Oral History of the age more than nine-million words long. He also claimed to be able to translate Longfellow poems into the language of seagulls. Gould’s charms, if you grant that he had any, quickly wear off. But something a little magical happens about two-thirds of the way through this book. I began to like Mitchell and to want to hear more from him – and I began to sympathize just a bit with Joe Gould in ways I hadn’t particularly intended to.

Wodehouse had a bit of the holy fool about him. He was an innocent, liable, like Bertie Wooster, to find himself in the most compromising situations but without accruing any personal blame. The radio talks he gave from behind German lines, for example, got him accused of collaboration during the war, though an investigation later cleared him. Likewise, in Thank You, Jeeves (the very first Bertie and Jeeves novel, published in 1935), the casual racism of the era raises hackles for today’s reader. The “N” word is thrown out several times and Bertie spends almost half the book in blackface. But Wodehouse’s essential naiveté is such that imputations of malice are quickly discounted. In fact, I wonder if this isn’t one of his very best novels. The standard Wodehouse formula is at work – there are engagements and threats of engagement, difficult relatives, combustible cottages, and an accumulation of crossed purposes that only Jeeves can untangle – but the pacing and plotting and repartee are particularly good. So too are the interactions between Bertie and his “gentleman’s gentleman,” spiced with the friction occasioned by Bertie’s intolerable banjo playing, which causes Jeeves to actually leave his service in the first chapter. Fear not, however. In the end all is well and there are kippers for breakfast, whole schools of them.

“I have always noticed, and it is a fact, that often when we have something valuable in our possession and handle it freely, we do not esteem or appreciate it in all its worth, as we would if we could realize how much we would miss it if we were to lose it. Thus we gradually belittle its value, but once we have lost it and miss its benefits, we feel it in our heart and are forever moody, thinking of ways and means to retrieve it. This, it seems to me, happened to all or most of those who went on that expedition, which Francisco Vasquez Coronado led in search of the Seven Cities, in the year of our Savior, Jesus Christ, 1540.”

The Coronado expedition was like a story out of legend, a half-medieval army marching into an unknown wilderness to chase rumors of The Seven Cities of Gold. But it was not a legend, and they found nothing of the sort. In fact, the record of their contacts with the peoples of the American southwest is filled with deceit, coercion, and violence. The Spanish – or at least their leaders – never tried to understand the world they stumbled into. They only understood gold. Quoted above, Castaneda, who was a member of the army, appears to have been more thoughtful. His memoir, written twenty years later, is haunted by wonder and longing for the strange lands he saw (his descriptions of buffalo herds and the Great Plains are among the earliest by any European), but also by regret.

From Berger’s 1970 novel Vital Parts: “The trick of survival was to accomplish something of no utility, and so small as to be inconspicuous.” If we admit that books, like so many of the best things, have no utility, then perhaps it explains Berger’s longevity. He was a recluse and underappreciated, but Little Big Man alone (which is so much better than the film based on it) is accomplishment enough for any life, I think.

I have a short piece over at The Dabbler today about how to use art to terrify and psychologically damage your children.

It’s either a ridiculous oversight of mine or else part of some grand plan which I have yet to form that I’ve never published anything about George Psalmanazar on a website ostensibly named for him. I’ll remedy that today by posting some of my reading notes for Michael Keevak’s biography of Psalmanazar titled The Pretended Asian (2004). I read the book a few months ago. Repurposing notes like this is something I do when I feel bad for not having anything fresh to offer. The fact is, I’ve been distracted by work, by travel, and by family emergencies. Forced to choose, I’ll preserve reading time at the expense of writing time.

Michael Keevak’s little volume seems to be the only book-length biography of George Psalmanazar readily available. It’s not at all bad. Keevak is a professor of foreign languages (specifically, English) at National Taiwan University, which – if you know anything about his subject – is unspeakably perfect. The man known to history as “George Psalmanazar” became a celebrity in London in the early 1700s by pretending to be a native of Formosa (Taiwan) – a place which at the time was more than half myth in the minds of Europeans.

Psalmanazar went to remarkable lengths to build up his personal fiction. He created a spurious Formosan language with its own script and a well-defined grammar. He published, complete with fanciful illustrations, a supposed history of Formosan culture peopled with subterranean aristocrats, schools that taught classical European languages, and plenty of human sacrifice. At Oxford, Psalmanazar tutored would-be missionaries in the language and customs of the country they intended to evangelize. Despite his clearly European features and blonde hair, he defended his imposture publicly and met with a great deal of success, though there were always doubters.

Eventually, Psalmanazar experienced a moral conversion, brought on by reading William Law’s Serious Call, and faded into a Grub Street obscurity, translating works from Latin and various other languages, and teaching himself Hebrew. He was a contributor to the massive, multi-volume Universal History and, unsigned, penned the article it contained on the island of Formosa, in which he announced that his story had all been a bad joke. Later in life, he was acquainted with the younger Samuel Johnson, who considered him an eminently learned and altogether admirable man, but who refrained from inquiring into his earlier career as a con-artist.

Psalmanazar arranged for the publication, on his death, of his confession, The Memoirs of *****. He never revealed his true name, but described a childhood in France, an education by the Jesuits and Dominicans, family difficulties, enlistment as a soldier in various armies, and how he launched his career of imposture by trying to pass himself off as an Irishman, then as a native of Japan, and finally as a Formosan when he came to England.

It’s a terrific story, though Keevak rushes things. He’s more interested in questions of race-perception, in Psalmanazar’s place in the history of western orientalism, and in “The Great Wall of Europe” – that is, western ignorance and presumptions of superiority vis-à-vis non-western peoples. Nonetheless, I particularly enjoyed Keevak’s chapter on the stubborn persistence of Psalmanazar’s entirely fake but ingeniously constructed Formosan language, which continued to crop up in foreign language sample books and published multilingual compilations of The Lord’s Prayer for generations after the mask had fallen from the man himself. 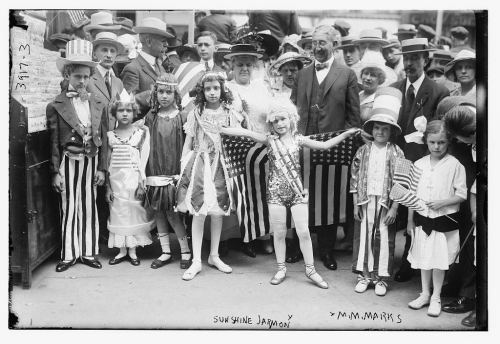 Everyone loves the Fourth of July, or else no ice cream.

Photo circa 1915, from The Library of Congress. Sunshine Jarmann (Jarmon) – the only kid who seems to be enjoying herself – later performed on Broadway in the Music Box Revue, 1922-23. Marcus M. Marks was Manhattan Borough President from 1913-17. He died in ’34.

We had in this village more than twenty years ago an idiot-boy, whom I well remember, who, from a child, shewed a strong propensity to bees; they were his food, his amusement, his sole object. …[He] had no apprehension from their stings but would seize them nudis manibus, and at once disarm them of their weapons, and suck their bodies for the sake of their honey-bags. Sometimes he would fill his bosom between his shirt and his skin with a number of these captives; and sometimes would confine them in bottles… As he ran about he used to make a humming noise with his lips, resembling the buzzing of bees.

The Bee Boy of Selborne, we learn, was a lot of trouble to the local beekeepers and was shipped off to another district where he unfortunately died before reaching manhood. But was his enthusiasm for bees a symptom of his idiocy, or the cause of it? White does not speculate. Regardless, the story offers a nice illustration for my idea that total, all-consuming devotion to a single object will render a person either sublimely admirable or sublimely ridiculous. I’m convinced that there is no in-between for the honest monomaniac.