The ways of entering this world are limited, but those of leaving it seem infinite.

~ F. Gonzalez-Crussi, Notes of an Anatomist

For fun I once contrived a prejudice against persons delivered by caesarean section. During the brief (but not brief enough) period that I carried on the joke, I made a point of asking after every new acquaintance’s method of birth, was it caesarean or vaginal? Any physical or intellectual clumsiness on the part of persons in the first category I glibly excused with the statement that, “after all, you can’t expect much of a Caesarean, can you?” 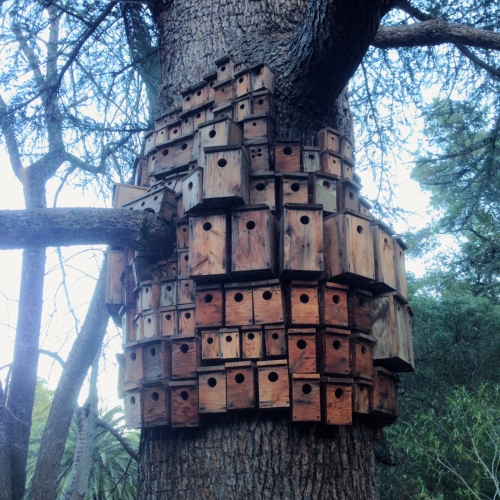 Apartment living is for the birds.

Easy pieces? You don’t expect me to understand any of that math, do you? It seems I’m not as smart as I thought I was, but neither are physicists, which is some consolation. (Anyway, per Socrates, the discovery of our ignorance is true wisdom, right?) In this book Feynman explains how we used to believe that we had discovered certain physical laws which went a long way toward making a kind of sense of the universe. It was a heady time. There seemed no limit to our mastery of the material world. But that was then, before quantum mechanics. These days, you can still trot out the old “physical laws” for some harmless diversion if you like – but don’t call them laws anymore. Because they’re wrong. Call them probabilities instead, but only when applied at a certain scale. They’re not even probabilities at the atomic scale. The truth is that we don’t really understand the relationships and interactions between objects. We don’t know why things do what they do, and we can’t begin to say what they’re going to do next. We don’t even really know what gravity is.

Travels with a Donkey in the Cevennes, Robert Louis Stevenson

Reading Travels with a Donkey, which is so far my favorite of Stevenson’s travel books, I remembered a visit my wife and I made a few years ago to the tony Napa Valley town of St Helena. The public library in St Helena shares space with a small museum dedicated to Robert Louis Stevenson, run on a volunteer basis by enthusiastic retirees. Stevenson and wife Fanny enjoyed their 1880 honeymoon in nearby rustic Silverado, where the site of their cabin and the summit of Mt St Helena are now embraced in California’s Robert Louis Stevenson State Park. I learned while reading the present title that there is a Robert Louis Stevenson Trail in France, which closely follows the route trod by RLS and dear Modestine (the donkey) in 1878. It seems that wherever he went in life, Stevenson’s passage was commemorated. This is remarkable because he is by no means a Shakespeare or Milton, nor even what most people would consider a second-tier Olympian of English letters. Geography bears witness, however, and many of his readers down the years will second the notion, that it’s very easy indeed to enjoy his company and to miss him when he’s gone.

I’ve done my best never to join any kind of book club, but now one of my corporate overlords has decided that’s just what we’ll have at the office. We begin with Malcolm Gladwell’s latest – and instructions to draw lessons from it on the challenges facing our business. When I was still a teenager, I remember despairing of adulthood when I saw my Dad reading books on the art of management, books like Leadership Secrets of Attila the Hun. Now it seems I’ve come to the same grim pass. Not that this is a business book per se. But it stinks of the same cult of “accomplishment” and is not the sort of thing I would voluntarily read. Having done so, I’m convinced that Gladwell (who may be the love-child of Art Garfunkel and Whoopi Goldberg) is a bit of a poseur. I won’t subject you to a detailed review of this book (for a slaying one, see John Gray in The New Republic.) I will only say that Gladwell’s blend of social science and self-help is not my idea of fun. I’m not sure what people see in him. The prose is limp. The preoccupations are mostly shallow. The “insights” are prejudiced. The much-vaunted storytelling is bland. As for the challenges facing our business – well, I hear there’s lots of money to be made in publishing.

The members of the jury have rejected me. Therefore I have no talent… I must die.

The consolation of never submitting your work for judgment by the Salon is that you can reach old age imagining you might, after all, be the greatest talent that ever lived.

My wife informs me that she had a romantic dream the other night involving Bill Murray. I asked her whether it was Ghostbusters-era Bill Murray or present-day Bill Murray. She wasn’t sure but said that his hair was definitely gray. It seems that as we age our notion of what’s attractive in members of the opposite sex keeps pace with us. When I was eighteen, I remember thinking it impossible I could ever find a thirty-eight-year-old woman appealing. Now I’m amazed to think that I ever found eighteen-year-olds appealing. When I’m seventy, I suppose that fifty-year-olds will look like pre-adolescents. At any rate, I can hardly blame Mr Murray for taking his chances with my wife.

Meanwhile our cat has died. More precisely, she was euthanized. It turns out that she had cancer in her bowels, which probably explains why she had taken to shitting in the hallway and vomiting over par this last year. She was just shy of twenty. I married into her acquaintance, but my wife had adopted her as a kitten from the Humane Society, back when Bill Murray was notably less gray than he is now. I used to make morbid jokes about the cat, as if I might willingly hasten her departure from this vale of tears. But in fact I miss her getting in the way when I’m reading on the couch. I miss her too-early good-mornings and the patter of her little feet on the wood floors.

Praying at bedtime with the kids, we ask God’s mercy on the soul of our cat. I suppose that cats must have souls as well as people. Why not? We miss them similarly when they’re gone. Reading Robert Louis Stevenson’s Travels with a Donkey the other day, I found this poignant bit on mortal farewells: “The world gives and takes away, and brings sweethearts near only to separate them again into distant and strange lands; but to love is the great amulet which makes the world a garden; and ‘hope, which comes to all,’ outwears the accidents of life, and reaches with tremulous hand beyond the grave and death. Easy to say: yea, but also, by God’s mercy, both easy and grateful to believe.” It’s the kind of passage I might like to have read at my own funeral, by Bill Murray. 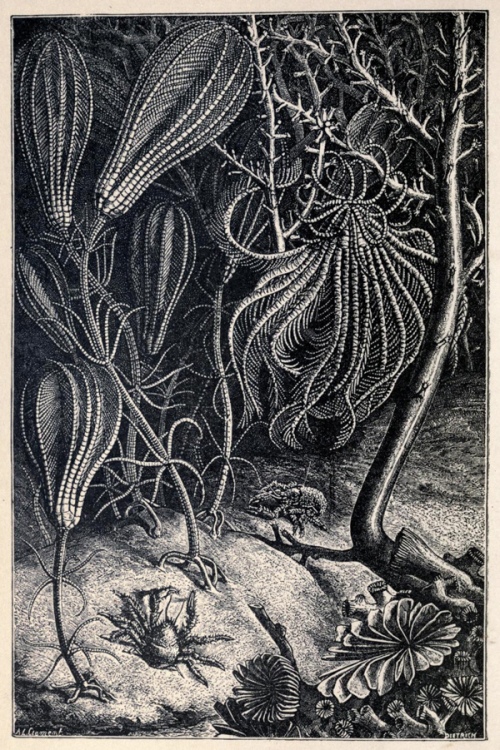 Surrendering to ennui, Franklin thought he should have been a pair of rolled trousers strolling down certain half-deserted streets.

Illustration by A.L. Clement for Living Lights: A Popular Account of Phosphorescent Animals and Vegetables by Charles Frederick Holder, 1887.

Sleep is the most moronic fraternity in the world, with the heaviest dues and the crudest rituals. It is a mental torture I find debasing… I simply cannot get used to the nightly betrayal of reason, humanity, genius.

Perhaps it’s because I have no genius to betray, but I side with those others who call Sleep blessed. Anyway, sleep is not without intelligence. Many times I’ve set myself a knotty problem before bed and woke next morning to find it magically unraveled, like the shoemaker whose work was finished overnight by the elves.