Except for the foulness of their bottoms, you would scarcely believe they were animals.

Kircher is describing apes. It’s not clear that he ever saw one himself. But the notion that toilet hygiene is what separates Sentient Man from Unphilosophic Beast is a nice one. If you’ve ever seen a hippo relieve himself, you know that he is soulless. The cat, on the other hand, suggests sentience, but she only achieves her cleanliness by a filthy maneuver.

A week ago on a beach at Monterey Bay I saw an impossibly vast flock of sooty shearwaters. It’s no exaggeration to say that there were hundreds of thousands of them. I had never witnessed anything like it. A hundred yards out and no more more than twenty feet above the swells, they moved in a thick inky line that stretched for more than a mile and curled out to sea in an arc that came round to bite its own tail, like an ourobouros. The birds were constantly crashing into the water and taking off again, tearing up the sea as they went, herding what I assume must have been a school of fish or krill toward the center of the wheel.

When the solar idiocy is upon me this is how I feel: like someone standing perfectly still while watching the immense chaos of activity which is the world as it swirls around and feeds on itself. But rather than feel a sense of horror or the fear that I’m somehow missing out, I just watch it all a little dumbfounded. Can there really be so much to do? Why all the noise and elbows and hubbub? What’s in the center of the wheel? I can ask the questions but, smothered as I am in dopey satisfaction and complacency, I can’t pretend to care very much about the answers.

It is rational to attack the police; nay, it is glorious.

I wonder if it’s a failure on my part not to have attracted more attention from the authorities. Am I not a rebel at heart? Do I not stick it to the man on a regular basis? I had a mohawk haircut once in high school, but not even that worked. 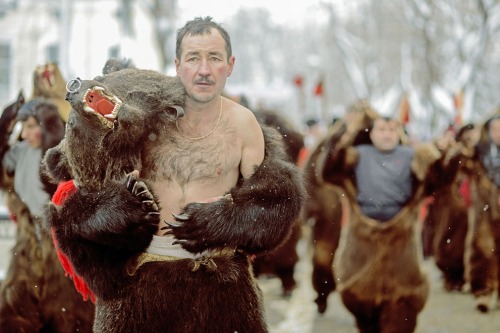 The bears all agreed that the unsuspecting village had entertained them richly, but then dinner took its revenge.