On a Scale of Value plotted as a circle, items located between one o’clock and eleven may be considered insurable: houses, automobiles, eyes, teeth, health, life, etc. These are easily enough converted to dollars. Not insurable are those articles straddling the uncertain noon where Priceless fades into Valueless: the pet dog that ate your fifth birthday cake but which you loved anyway, your mechanically troubled ambition to defeat gravity, and your favorite deceased friends and relatives.

Tagged as Insurance, Oh the Humanity, Quotes, The Praise of Folly, Value

A pangram is a full tour of the alphabet in a single sentence – a comprehensive play of the keyboard. One year, when I was a boy, we inherited my great-grandmother’s upright piano. It had been painted a creamy color to match its own yellowed ivory key tops (two of which were missing), and my mother spent weeks in the garage with a can of paint stripper uncovering the mahogany beneath. I would sneak out after dinner to admire it: a tall magical box with gummy, peeling flesh, sweating fumes. I was obsessed with the idea of trying to press every key at once. Bizarre contortions of arms, legs, hands, feet and neck, were necessary to bring it off. The summoned thunder – the total tonal expression of the instrument – was never music, but it strangely satisfied.

She was a lifelong conservative and member of the Republican Party.

Certain people seem always to have known who they are and what they’re about. It’s tempting for persons like me – persons who feel like we’re being constantly reintroduced to ourselves – to write them off as creatures of frigid imagination, unseduceable to the vital possibilities. I’m sure that’s wrong. But descriptions like the above (even sans the absurdity of a ‘Party Affiliation’ line on Baby Ginger’s birth certificate) never convince. Human is the only thing we can spend our whole life being – and that only by luck and hard work.

Friends and neighbors, he explained, sit up all night round the coffin, telling funny and often improper stories, dancing, and drinking rum, and even, after concealing small objects in the mouth or other natural hiding-places of the corpse, playing games of hunt-the-thimble. If the corpse has been a heavy drinker during his lifetime, bottles of rum are poured down his throat; if a dancer, his body may be removed from the coffin and whirled round the room…

Something similar happens when a figure in world affairs or the arts passes over River Styx. By means of print and commentary, the corpse is explored, predilections and achievements are rehearsed for memory’s sake, and the floor is cleared for a posthumous last dance. I was sick over the weekend and only learned today of Patrick Leigh Fermor’s death. His feats of wartime daring are literally the stuff of celluloid legend, but (like others of my generation) I only came to know him through the first two volumes of the unfinished trilogy that he began with A Time of Gifts. Here’s to hoping that the time of gifts isn’t ended just yet and that among the abandoned articles of his long and magnificent life there’s a manuscript copy of that dearly missed third installment.

Tagged as A Time of Gifts, Books, Patrick Leigh Fermor, The Traveller's Tree

One day in sixth grade I was summoned to the locker where B (dictatrix of schoolyard popularity) stood surrounded by her coterie of toadies. She ran her fingers through my hair, which there and then convinced me of the truth of every miracle ever committed. “I always wondered,” she lingered over each word, “what a monkey’s ass felt like.” Which convinced me of the devil’s wiles too. I mulled my revenge for months afterward, but never attempted it. Instead, to this day, when I catch myself in the midst of some folly, I do B the honor of putting hand to head and replying, “Yes, that’s exactly what it feels like.”

Why do I think reading is important? …We think largely in words. A medium made only of words doesn’t impose the barrier of any other medium. It is naked and unprotected communication. That’s how you get pregnant.

An echo, perhaps, of Hoffer’s ‘copulating minds,’ which also accounts for the fact of textually transmitted disease (Randian Objectivism, for example). But on reading Ebert’s quote I first thought of Pope Paul VI. Perhaps it was the advent of the birth control pill that inspired him to do away with the Index Librorum Prohibitorum. It’s unseemly to be in the business of promoting prophylaxis in one form while condemning it in another.

Guilt is never to be doubted.

~ Franz Kafka, In the Penal Colony

A bag of human body parts was found on a sidewalk not far from here. Yesterday at lunch, while chewing a bite of taco, I was asked if I’d heard anything more about the case. At just that moment I choked and had to find a cup of water and a chair to recover my equilibrium. The timing was uncanny: I could almost suspect myself of being the killer. As a child I used to imagine that I was the secret committer of all crimes. News of any infraction made me feel guilty: it was too easy to pretend that I had done it. But life teaches us not to overrate our abilities.

How to Sound Foreign, etc. 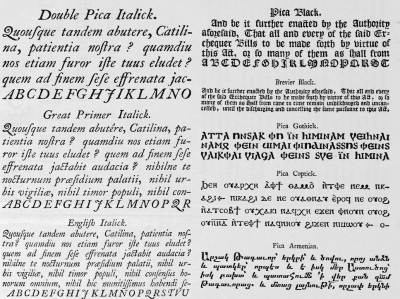 News reached us yesterday of a dazzling metamorphosis, a case of so-called Foreign Accent Syndrome. A middle-aged woman visits her dentist for the removal of several teeth. She steps into the fog of anaesthesia a native of Bloomington, Illinois and an hour later emerges a native of someplace between London and Dublin. Such cases, we’re assured, are not unknown to medical science. But if I know you, dear reader, the story percolated through your brain overnight and you woke this morning with a single, desperate question: “Where can I get a surgery like that?” You always wanted to sound foreign.

First things first. Before your insurer will agree to cover the surgery you’ll need a diagnosis. Talk to your doctor. An aural examination may identify you as a sufferer (for example) from Francopenia, Italopenia, or Moldopenia – that is, the condition of sounding insufficiently French, Italian, or Moldovan. Verbal pathologies like these are surprisingly common and generally picked up in childhood. Chances are that you suffer from more than one of them. Your doctor may be kind enough to offer a list of diagnostic alternatives. Choose one based on the deficiency you most want corrected.

Depending on your diagnosis, the procedure will vary in degree of invasiveness and unpleasantness, as well as recovery time. Correction of Francopenia, for example, falls on the relatively pleasanter side of things, entailing the intentional surgical deviation of the septum (assuring a nasal affect) and three weeks of intensive tube feeding on cream-based sauces, butter-cooked gastropods, and (naturellement!) pâté de foie gras. At-home recovery involves a month-long immersion in the music of Serge Gainsbourg and the dueling filmographies of Truffaut and Godard.

If, however, you are ill-starred enough to suffer from Russopenia (sounding insufficiently Russian), expect something more trying. Pre-surgical prep requires three months subsistence on a liquid diet of second-quality vodka and smoked tea. Then your abdomen is opened and stuffed with beets while your liver is removed, marinated in more vodka, and laid open to the abuse of a bare-fisted Cossack boxer who pummels it for three successive days. The poor defeated organ is finally set on fire and doused with sooty Moscow snow before being replaced. Successful treatment of Russopenia may reduce your life expectancy by one third.

There are other pathological possibilities. My wife, for instance, suffers from a condition not listed in any diagnostic manual: she’s often mistaken for being foreign though she has no accent at all. She seems to give off a sort of audio displacement field that steals brief snippets of verbal output from conversations no doubt occurring, in real time, on other continents. Or it may be that she’s perfectly well but those mistaking her for a foreigner (grocery store employees, mostly) suffer from a disorder that makes them hear accents where there are none.

He may blush at my sharing it, but as a kid my brother had a bad case of Logorrhea. Our parents never brought him in for a syllabectomy; I suppose they hoped he’d grow out of it. Anyway, it’s a fairly common condition, as you’ll know if you’ve ever taken public transport or watched a televised presidential debate. Poor little guy. Classmates were always quoting Run DMC at him (“You talk too much, homeboy, you never shut up”), and the fact that he had a voice like Linus from Peanuts didn’t help things. I admit that I was a talky kid too, but my brother’s verbal incontinence was truly astounding: morning to night his whole day was one long messy vowel movement.

I know those little phrases that seem so innocuous and, once you let them in, pollute the whole of speech. Nothing is more real than nothing. They rise up out of the pit and know no rest until they drag you down into its dark.

In the intro to his essay collection titled On Nothing and Kindred Subjects (I’ve quoted it before), Hillaire Belloc asks about Nothing: “Is it not that which Mankind, after the great effort of life, at last attains, and that which alone can satisfy Mankind’s desire?” Verbal paradox is acceptable as comedy but not as philosophy. It makes fun reading, rarely good thinking. Too liberally indulged (Chesterton is best in small portions), it stops up the bottle of intelligence.