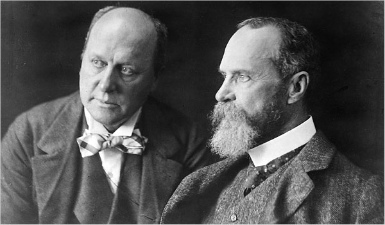 Metaphysics has usually followed a very primitive kind of quest. You know how men have always hankered after unlawful magic, and you know what a great part in magic words have always played. If you have his name, or the formula of incantation that binds him, you can control the spirit, genie, afrite, or whatever the power may be. Solomon knew the names of all the spirits, and having their names, he held them subject to his will. So the universe has always appeared to the natural mind as a kind of enigma, of which the key must be sought in the shape of some illuminating or power-bringing word or name. The word names the universe’s principle, and to possess it is after a fashion to possess the universe itself. ‘God,’ ‘Matter,’ ‘Reason,’ ‘the Absolute,’ ‘Energy,’ are so many solving names. You can rest when you have them. You are at the end of your metaphysical quest.

In the first lecture of Pragmatism, William James writes that “the potentest of all our premises is never mentioned.” The unspoken premise is the individual temperament of a philosopher which he may hide under his cloak or pretend is irrelevant but once revealed serves to explain so much of his thought. I am not an academic and can’t pretend to expertise here (hence any sloppiness below), but James’s book might have gained something, I think, if he’d returned to this notion at the end of it and more frankly examined his own philosophy by its light. If he’d been a character in one of his younger brother’s novels, he’d have been forced to do so.

In Pragmatism James wants us to reconsider the Aristotelian correspondence theory of truth, according to which an idea or assertion is true as far as it reflects the way things really are. By this model, the truth of a statement is independent of our having tested it. So, for example, if I were to give you an envelope and tell you it contained a dollar bill, the statement would be either true or false depending on what was actually in the envelope, even if you never opened it to check my statement against reality. Most people are satisfied with this definition. It’s our common-sense notion of truth in the western world.

James suggests that rather than use the word “truth” to describe a correspondence of assertion and reality we reserve it only for things that have, one way or another, passed a test of verification or proven themselves beneficial. Ideas, according to pragmatism, are tools, and if they don’t “work” for us, they’re meaningless. Reduced like that, James’s idea sounds simple enough, and possibly appealing, but James gets overexcited and there are passages in Pragmatism where he seems to want to discard the correspondence theory of truth altogether. To return to my example of the envelope with the possible dollar bill inside, James might say, for instance, that the assertion “becomes true” when and if we open the envelope and find that it does indeed contain a dollar bill. Truth, James says when he gets carried away with himself, is something that “happens to an idea.”

To be fair, James doesn’t really want to do away with the Aristotelian notion of truth, and he apparently spent some sweat and labor after the publication of Pragmatism trying to calm the apprehensions he roused in some of his readers. But James had been impressed by his friend Charles Pierce’s elucidation of the law of errors which states that repeated minute scientific observations inevitably vary along a plottable curve, allowing us to infer an accurate-enough position (of a star, say) but never making for absolute certainty. Unless we want to go for a ride with Bishop Berkeley, then, and deny the independent material existence of sense objects altogether, there is an unbridgeable (if infinitesimal) gap between things in themselves and our perceptions of them. While that gap may look small from an everyday distance, it can be philosophically dizzying. With his pragmatic redefinition of truth James wanted to build a bridge to cross it while keeping the vertigo to an acceptable level.

James was also laboring under the stark shadow of 19th century German metaphysics and a Darwinian scientific worldview that was just flexing its muscles. Whereas the rationalists of the period wanted to describe a world in which matter is governed hierarchically by mind, science made forceful arguments for mind’s governance by matter instead. What James wanted was a way to honor his pro-scientific empiricist sympathies while at the same time respectably making room for God. Pragmatism’s careful adjustment of terms allows James to test his idea of God, find it psychologically or socially beneficial (i.e. a “working” idea) and proclaim it therefore true. I wonder if he might have found it easier to support his theism nowadays as Hegel and Kant recede in the background and science with its quantum theories and dark matter allows more room for interested speculation.

In the end, however, I find I agree with the judgment of the late Martin Gardner who shared James’s theism but felt that pragmatism was more an attempt to rewrite the dictionary than a philosophy in its own right, and that anyway philosophies departing from the common uses of terms and resorting to private definitions can have little enduring value. If pragmatism had “cash-value” for James himself, I suspect that had something to do with his own unspoken premise, a temperament balanced painfully between what he saw as the irreconcilables of materialistic determinism and the hope that, after all, words really are magic – or can be made so by some delicate adjustments.

There is no exit from the dictionary.

Words beget and are begotten by other words in endless circular succession. There’s certainly no lack of them in our house. My son, for one, never shuts up except when he’s got his face in a book. Even then, I swear, the unspoken syllables float around the living room like ghosts of the unborn. The other day at dinner I convinced everyone to sit perfectly still and say nothing, just for ten seconds. It was the loudest ten seconds of my life: the unnaturally prolonged thunderclap of a twenty-pound dictionary being slammed shut.

Your typical ultra-abstractionist fairly shudders at concreteness: other things equal, he positively prefers the pale and spectral. If the two universes were offered, he would always choose the skinny outline rather than the rich thicket of reality.

In the fourth century Basil of Caesarea wrote: “Hunting truth is no easy task. We must look everywhere for its tracks.” Truth, by James’s account, was a bit of a squishy affair, but he knew that the fox is only cornered in the thicket.

In 1617, the Maréchal d’Ancre, much hated by the people, was assassinated. The day after the assassination, his body was exhumed and cut in pieces by a savage crowd, which the day before had not been able to vent its hatred thoroughly. One of these “posthumous executioners” tore the heart out of the Maréchal’s chest, intending to devour it in front of everyone. But before he brought it to his mouth he had it cooked a point over a charcoal fire, and sprinkled it with aromatic vinegar.

~ Aldo Buzzi, Journey to the Land of the Flies

In Midnight Oil, the young V.S. Pritchett (then an ex-pat in Paris) is warned by a strict-minded old crone that the French “are mesmerized by sensuality” and that “their food is the cause of it – cooking in butter, the sauces, aperitifs,” etc. There’s a passage in Sentimental Education to back her up. Moreau is at a party, enjoying himself immensely, when Flaubert informs us with a wink that “the political verbiage and the good food began to dull his sense of morality.” No doubt the Maréchal’s cannibal was similarly inspired. It would make a nice dissertation topic: the shared history of political violence and barbecue.

Belgian lilacs bloom when the sum of the squares of the mean daily temperature since the last frost adds up to 4264°C.

The cosmos is revealed as a field of infinite trivia. Adolphe Quetelet’s discovery proves, I think, that unfortunately there is no end to knowledge. Some facts are better left undiscovered.

Three Paragraphs of Near and Far

No doubt you read about the recent suicide of Alireza Pahlavi, younger son of the former Shah of Iran. Last week I had lunch with a coworker whose father had been a high-ranking minister under the Shah. His position required that he travel with armed guards and two cars, one a decoy. As a boy my friend kept “a string of polo ponies.” He was seventeen at the time of the revolution and the family fled to India where they spent ten years (“the happiest of my life”) before coming, finally, to California. It’s hard to imagine such irrevocable dislocations. I wonder sometimes about the circumstances of my own family’s removal to the colonies three hundred years ago. It can’t only have been for the delight of living in the then-wilds of New Jersey. I suspect that we kept very few polo ponies back in Britain.

If box office stats were drawn from movies screened in our living room, Charlie Chaplin and Harold Lloyd would still be the world’s biggest stars. Last week we premiered Chaplin’s Modern Times (1936). The Tramp’s improvised version of Leo Daniderff’s Je cherche après Titine was a big hit. Its first audiences, I think, had never heard Chaplin’s voice on screen before. This past weekend we also watched Lloyd’s Speedy (1928) for the second time. It’s one of my son’s favorites. The chase scene with the horse-drawn train car through the streets of New York, the Coney Island sequence, the taxi ride with Babe Ruth, the street brawl of blunt-nosed toughs and octogenarian Civil War vets: it’s as much an education as an entertainment.

I took my five-year-old daughter to the park recently. I watched her play a while and then we sat on a bench to eat apple slices and pretzels. She had just told me not to stand so near her while she was playing (“I might want to make a friend,” she explained) when behind us we saw a great blue heron, no more than a dozen feet away. We were mesmerized, in the presence of an alien intelligence. We admired the way it scanned the grass for insects and how it craned its neck at a wary tilt when a hawk passed overhead. The heron was about the same height as my daughter, and wearing the same color. It seemed to share her concern about my proximity too. I tried moving a little closer for a photo but it drew the line at about eight feet. I used that for a rule back at the playground and had no further complaints from Miss Gimmespace.

Belief passes, but to never have believed never passes.

It seems an unlikely coincidence the way Hoffer’s statement echoes Leon Bloy: “Suffering passes, but the fact of having suffered never passes.” If Hoffer intended some kind of comment on Bloy’s idea, I’m not sure what it was. But then Hoffer may never have read Bloy at all. It’s a tempting rhetorical construction for persons given to gassy sententiousness, whether in the negative (Hoffer) or affirmative (Bloy). I hereby adopt it: Blueberry pie passes, but to never have eaten blueberry pie never passes. Skateboarding passes, but the fact of having skateboarded never passes.

The New Psalmanazar
Blog at WordPress.com.