There is a sinfulle state of dreames…and there may be a night booke of our Iniquities, for beside the transgressions of the day, casuists will tell us of mortall sinnes in dreames arising from evill precogitations; meanwhile human lawe regards not noctambulos, and if a night walker should breake his neck or kill a man, takes no notice of it.

~ Sir Thomas Browne, from his notebooks

I read once about an elderly man who dreamt he was wrestling a stag.  The animal thrashed desperately with its antlers but he got an arm round its neck and gave a sharp twist.  He woke to find that he had killed his wife of fifty years.  One hopes he was a great philanthropist most nights – that he dreamt of curing cancer, bathing lepers or rescuing babies from falling pianos.  It might have counterbalanced his transgression.  But if we’re culpable for our dreams maybe God is similarly bound by dreams of universal pardon.

SAUCE, n.  The infallible sign of civilization and enlightenment.  A people with no sauces has one thousand vices; a people with one sauce has only nine hundred and ninety-nine.  For every sauce invented and accepted a vice is renounced and forgiven.

An illustration of the painful path to virtue: I came home last night and found my wife concocting a sauce of red chile peppers.  She had roasted them in the oven and the fumes filled the house.  I immediately began coughing.  There was a sharp pricking at the back of my throat.  The floodgates of eyes and nose were thrown wide and I fled to the bedroom until the air was clear.  The final result of her labors, however, was beyond tasty – it was another yard won from creeping barbarism.

The beauty of the garden was a torture because I could not find the words in which to describe it… I would be seized by a breathless sensation for a moment or two when something real – that is to say some definable vision – would seem to be there, but the moment passed; I would fall into the dreamer’s exhaustion and ennui and a feeling of meaninglessness.

It’s said that newborns and victims of stroke are sometimes unable to distinguish between objects.  The tree, the grass, the fence and the walker melt into a single entity or atomize to a multitude.  A syntax of the eyes needs to be learned.  Moments of aesthetic perception can leave us similarly disoriented.  Until words come as palliatives for the pain of beauty, we stagger like Adam in Eden before he named the other creatures: “The beauty of the garden was a torture because I could not find the words in which to describe it.”

Tagged as A Cab at the Door, Beauty, Language, Quotes, V.S. Pritchett

Introducing Children to the Holocaust

I once met a woman whose job it had been to remove gold fillings from the mouths of the dead.  She was a small person with short dark hair and an accent, a younger friend of my grandmother, and it was by that gruesome occupation that she had survived the concentration camps.  I couldn’t shake the awful image of it.  I was eleven or twelve at the time; she must have been a girl about my own age then, turning over corpses with a pair of pliers in her hand.

My son worships Charlie Chaplin.  But he wasn’t sure, at seven years old, that The Great Dictator was a film he could appreciate.  I had explained to him that it satirized Adolf Hitler, a very bad man, and Nazi Germany at the beginning of the Second World War, which (I reminded him) two of his great-grandfathers had fought in.  “Maybe I should be a little older before I see it,” he said.  But we started the movie and by the time we reached Adenoid Hynkel’s macaronic speech under the banner of the “double cross” any hesitation had been conquered by hilarity.

He was baffled and disturbed, however, by the scenes in the ghetto when storm troopers marched through the streets painting ‘JEW’ on the windows.  They bullied shopkeepers and women and pushed and threatened Chaplin himself, in his role as the unnamed Jewish barber.  Why are they all being so terrible? he wanted to know.

I gave what could only feel like a weak explanation.  How, I wondered, does one go about introducing the idea of the Holocaust to a seven year old?  He knows something about the history of slavery in the United States, about President Lincoln’s emancipation proclamation and the American Civil War.  But these things must seem far away compared to the horrible conflict that touched, one way or another, the lives of his parents’ own grandfathers.

We want to protect our children from damaging knowledge.  We also want them to understand the kind of world they live in.  The danger of the first is that we leave them defenseless in their innocence.  The danger of the second is that their souls are poisoned and they surrender later in life to that despairing notion Moses Herzog rails against in Bellow’s novel, that “the truth is true only as it brings down more disgrace and dreariness upon human beings, so that if it shows anything except evil it is illusion.”

My grandmother’s friend never talked to children about the war, but she silently showed me the fading blue numbers the Nazi jailers had tattooed on her arm.  It’s less and less likely my children will ever meet survivors of the death camps.  But if there is a way of introducing the Holocaust to a child without at the same time depriving him of natural hope, perhaps Chaplin’s movie is it.  George Santayana wrote that “between the laughing and the weeping philosopher there is no opposition.”  Chaplin, I think, is proof of that.

Owe your banker £1,000 and you are at his mercy; owe him £1 million and the position is reversed.

Panurge in Rabelais’s third book insists that “nature has created man for no other purpose but to lend and borrow.”  Vision is borrowed from light, breath from air, the atomic materials of flesh and blood from ancient exploded stars.  Life is a usurious circle guaranteeing insolvency, after which our effects are taken up by others.  My mother warned me not to “borrow trouble” by worrying over things that were in God’s hands.  Maybe there’s as much trouble in insufficiently mortgaging oneself.  Keynes would rewrite Polonius’ advice to Laertes: “Neither a borrower nor a lender be – but if you borrow, owe big.” 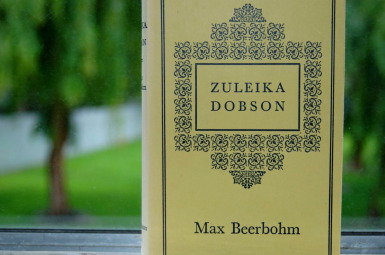 Penguin these days is publishing some very attractive collector’s editions of famous novels.  I was recently in one of the local corporate bookstores and took a copy of Pride and Prejudice from the shelf to admire the cover art.  As lovely as it looked from the outside, however, the quality of the typeface – digitally perfect, utterly regular – was a turn off.

If we’re to fall fatally in love (with a book, with a person), some irregularity of features is needed.  “There is no excellent beauty,” Francis Bacon wrote, “that hath not some strangeness in the proportion.”  Consider Zuleika (and Zuleika):

Perhaps it’s hard to tell by the photographs here.  You’ll have to trust that I was instantly smitten with this book.  The flimsy, fading dust jacket and loose binding; the high quality of the paper combined with the smudged, uneven application of ink; the inspired choice of typeface, with the upturned ‘e’ that recalls Zuleika’s own “shapely tilt of the nose” –  it all adds up to something irresistible.

The trick of survival was to accomplish something of no utility, and so small as to be inconspicuous.

Berger’s Reinhart is thinking here of the barely perceptible bumps and dents he left in the family home as a child and which are still there years later when everything has been repainted and refurbished.  We find it easy to list off our significant influences: parents, teachers, mentors, artists, religious figures and philosophers.  But we must also bear the marks of innumerable lesser – even momentary – encounters, long forgotten, of equal or greater importance.  Like figures from a polaroid that’s fallen in the water, we bleed into each other.  The knocks and nicks and scrapes we carry are as difficult to account for as the final conundrum of our self.  Those we give unknowingly to others make up a shadow memorial of our life.

The man who writes in Saxon
Is the man to use an ax on.

Bitter Bierce did not share that opinion of Orwell’s that monosyllabic words of Anglo-Saxon origin are generally preferred.  Of course, if it weren’t for his use of ‘use’ (Latin by way of French) in the above, Bierce himself might have invited the ax.  Personally, I waver.  There is in certain words like ‘wreak’ and ‘death’ a vintage odor of the mead hall that stirs the blood.  But if I limit myself for a full day to Fowler’s favorites, I have nightmares in French and Greek and wake the next morning shouting out for my sesquipedalia verba.

The Tropic of Taqueria 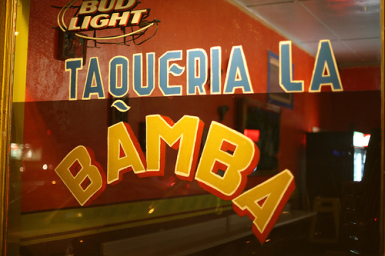 Patrick Kurp notes a “culinary disappointment” during his recent trip to Portland: the inconvenient closure of the local taquerias.  I can sympathize.  I don’t know Mr Kurp but I used to live in Seattle, not far from where he lives now, and I can assure you that there is no such thing as authentic Mexican food in Washington State.  I’m surprised to hear that it may exist in Oregon, but Kurp once lived in Houston so he ought to know what he’s after.

Predictably, the Mexican food improves the farther one travels down the west coast of the United States.  From San Francisco southward is a golden territory.  The 38th parallel, as I imagine it, marks an invisible Tropic of Taqueria, roughly coinciding with the historical frontier of Spanish and Mexican settlement.  Our relocation to California six years ago was full of gastronomic consolations (local wine, year-round farmers’ markets, fresh artichoke and avocado, etc.) but easy access to real Mexican food was perhaps the most consoling.

A personal favorite is Taqueria La Bamba in Mountain View, not far from the campus of a certain Internet Goliath I will not name.  Their al pastor and carnitas (crisped at the edge and tender inside) are tasty perfections.  Also recommended are the Salvadoran pupusas, thick corn tortillas stuffed with pork or cheese and eaten with curtido, a fermented cabbage and onion relish.  Wash it all down with a glass of sweet horchata to put out the fire.  At La Bamba, a taco will set you back a negligible $1.85.

A more recent discovery is Victor’s, not far from my office in San Francisco.  While their al pastor failed to impress, the carnitas and sopes have been praised in my hearing.  The chief reason to eat here, however, seems to be the saucy compliments (and I don’t mean the salsa).  At Victor’s you get to hear yourself called “guapo” (handsome) at least a half dozen times by the motherly ladies behind the counter.  “Hola, guapo!”  “What’s it going to be today, guapo?”  “Hasta, guapo!”  This is what Victor’s is known for.  To judge by my receipt ($4 for a single taco), the special treatment comes at a premium.

Readiness to answer all questions is the infallible sign of stupidity.

I turn to Bellow for flattery.  Because if, on the other hand, unreadiness to answer any question whatsoever is the mark of intelligence, then you may write in my name for the presidency of MENSA.  I’m daily astonished at how little I know – and how little, it seems, I can know.  Whether I’m asked my opinion on a top-ten controversy of the day or a trivial bit of work-related nothingism, my response is the same: Who the hell am I to have an opinion?  Most days it’s all I can do to keep functioning as an organism and not go mad.